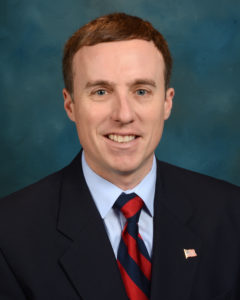 James has worked as a flight instructor at CSG Aviation, then as a captain for the Bill Heard Family, Carl Gregory Enterprises, and has now transitioned to a position with Synovus and TSYS.  At his current job, James is a member of the flight department’s safety action group as well as a member of the Southeast Aviation Safety Roundtable.

James and his family attend Saint Luke United Methodist Church and are active with their Homeless outreach program First Saturday. He and his family also volunteer their time at Animal Ark Rescue. James has also served his community through participation with the Civil Air Patrol as a Mission Pilot

For more information on Commissioner Barker please click on the linked in icon below.

Unable to fetch the feed
Error :